In what was termed a memorable moment by Headteacher Pamela Adrian, the Kwakwani Secondary School on June 7th opened its computer lab outfitted with fifteen new computer systems and air conditioning to the students of the school.

The aforementioned are donations from Mr. Rahaman Razac of R. Razac Business and Enterprise, and stand part of his Corporate Social Responsibility to the community. Mr. Razac is currently involved in the logging industry in Kwakwani and as mandated by the Guyana Forestry Commission (GFC), large loggers must contribute in meaningful ways to the areas in which they operate.

According to the Headteacher, the donation evidences Mr. Razac’s understanding of making technology an embraceable tool to use in classrooms, and they now allow the students to experience the era of digital explosion and develop their minds. While noting her gratefulness, she also thanked the GFC and the Minister of Natural Resources Hon. Raphael G.C Trotman for the roles they played.

Just weeks ago, the Minister had challenged Mr. Razac to contribute to the technological development of the community. It was then that Mr. Razac took up the mantle, identified the secondary school to be the most suitable, and began his work.

Minister Trotman while speaking to the students, teachers and other officials gathered noted his happiness for the contributions made. He went on to urge the students to care the items given and utilize them in ways which would aid in their educational development.

“We are in the age of technology; computers are the new slate. I challenge you all to make use of this technology and take care of it. Leave the computers in good standing for those coming after you, and focus on your schoolwork and studies.”

Community resident Mr. Jocelyn Morian also commended the donation and noted that it will now assist the secondary school and the entire community seeing that many students will benefit. He also noted that maximum care will be given to the donations.

It gives the Minister great joy to have been able to assist in moving the Kwakwani Secondary School further in the direction of development. The Minister and the GFC remains committed to the educational development of youths of the community and the Kwakwani’s overall development through the natural resources sector. 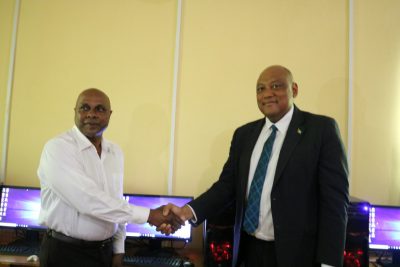