During a recent visit to the mining province of Region 10, Minister of Natural Resources, Hon. Vickram Bharrat, inspected a number of forestry stations, including the Kwakwani Forestry Station, attached to the Guyana Forestry Commission (GFC).

Minister Bharrat was accompanied by Minister of Labour, Hon. Joseph Hamilton, and teams from GFC and the Guyana Geology 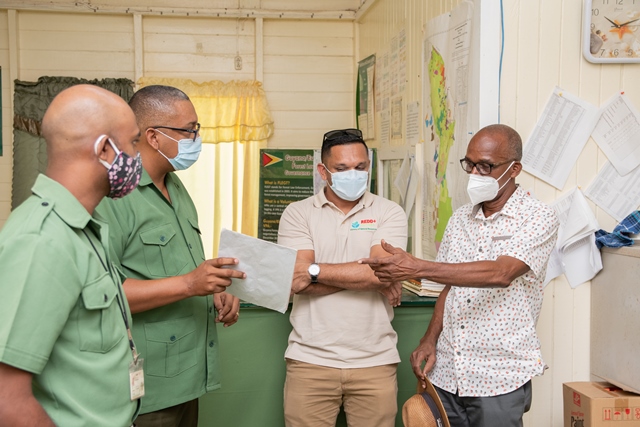 Minister of Natural Resources, Hon. Vickram Bharrat and Minister of Labour, Hon. Joseph Hamilton with members of the GFC at the Kwakwani Forestry Station

and Mines Commission (GGMC).  Both Ministers listened to and addressed the issues and concerns which were raised by the residents of Kwakwani.

Speaking on the proper representation of Kwakwani’s Logging Organisations workers on the GFC’s board, Minister Bharrat noted that approximately sixty other organisations have made a similar request.

“There’s a limitation to the board, and there are certain statutory bodies that must be on the board. However, what we can do is put systems in place where your organisations can have interactions with the management and GFC’s board members,” Minister Bharrat explained.

On the issue of concessions, Minister Bharrat stated that while he cannot comment on concessions that were granted before his appointment in the Natural Resources Ministry (August 2020), he will launch an investigation into the matter.

“These are issues that the PPP/C Government will look at it, especially the granting of concessions after the No-Confidence Motion because the previous government would have lost its legitimacy after this motion,” he clarified.

It has been alleged that after the No-Confidence Motion in December 2019, concessions were granted to persons without the resources and capacity to harvest logs It was noted that holistically, without logs being exported, no foreign currency is coming into the country.

“The PPP/C Government will look into the matter to ensure people are working their concessions because it will not only benefit the village of Kwakwani but Guyana as a whole,” Minister Bharrat disclosed.

“I am committing to you that this Labour Minister will do everything necessary, everything practicable to ensure that workers are not taken advantage of. Whatever we have to do with the law, if we have to strengthen it and mend it change it whatever. I am committing to you that no one will come and open up modern-day plantation in Guyana.” Minister Hamilton emphasised. 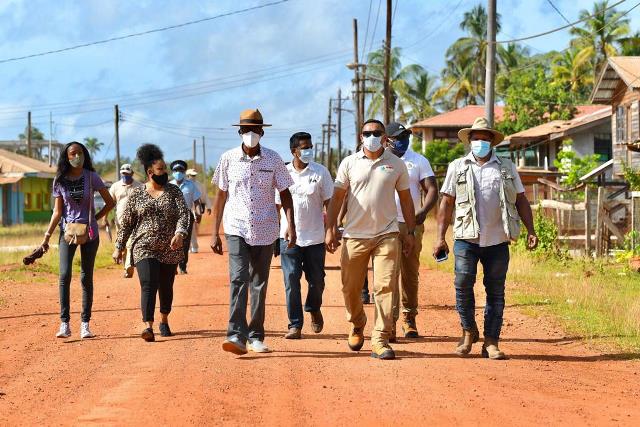 Minister of Natural Resources, Hon. Vickram Bharrat, Minister of Labour, Hon. Joseph Hamilton and team in the community of Ituni on August 28.