No single budget in the world can solve all of a country’s ills in one cycle, but Minister of Natural Resources Vickram Bharrat posits that through the PPP/C’s successive budget, the administration will continue to work assiduously to improve citizens’ standard of living.

The budget themed, ‘Steadfast against all challenges, resolute in building our One Guyana,’ contains a slew of measures to create wealth for all Guyanese, and improve their livelihoods. This follows the $383.1 billion national budget in 2021. 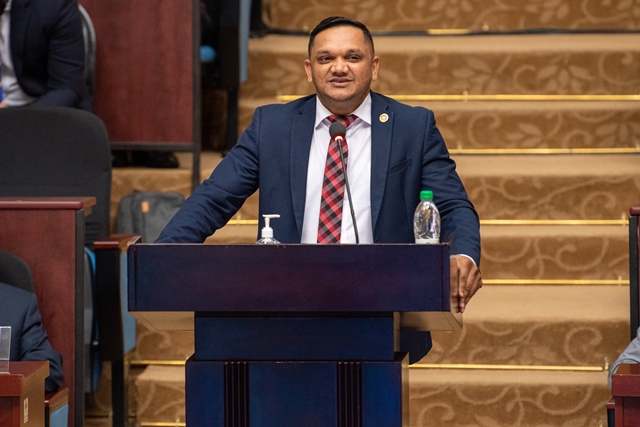 In his presentation to the Budget 2022 debates on Thursday afternoon, the natural resources minister confidently outlined, “We know and we accept that Budget 2022, even though we know that it is the best budget presented in the country, will not solve all of our problems, but we will come again in 2023 and 2024, until 2030 and 2040 in order to make the lives of the people in this country better.”

Minister Bharrat chastised the major opposition APNU+AFC, for failing to make realistic recommendations in their budget presentations. Budget 2022 has been deemed historic and transformational, not only for its mammoth allocation of $552.9 billion, but the fact that it is supported with revenues from the Natural Resource Fund (NRF). This is the first budget to be funded with monies from the NRF.

He went on to list agriculture, mining, forestry, tourism, manufacturing, security, education, healthcare, human services and infrastructure as some of the non-oil sectors set to be supported by the oil money.

Senior Minister in the Office of the President with responsibility for Finance, Dr Ashni Singh read the budget which is centered around the development of people, improving infrastructure, capacity and an enabling environment for the overall growth of Guyana. Furthermore, the budget addresses frontally, concerns and aspects of Guyanese welfare in the most detailed and precise way a budget can.

After five days, budget debates come to an end on Friday. On Monday, the Committee of Supply in the National Assembly will move to consider the budget estimates.

As part of measures, the government has initiated a slew of tax removal measures to further enhance the ease of doing business and cushion the increased cost of living as consequence of the COVID-19 pandemic and the hindrances in the global supply chain.

Some of these measures include: