Aranka Mining Station to be opened in 2022 – Minister Bharrat

The Aranka mining station is on course for completion with its opening slated for later this year.

Minister of Natural Resources, Vickram Bharrat announced this during the consideration of estimates and expenditures for Budget 2022 on Tuesday afternoon.

“The Aranka mining station will be the new station added to the Bartica Station which houses the core wardens that assist the GFC and the GGMC with monitoring activities in the mining and forestry locations around the country,” Minister Bharrat explained to the Committee of Supply. 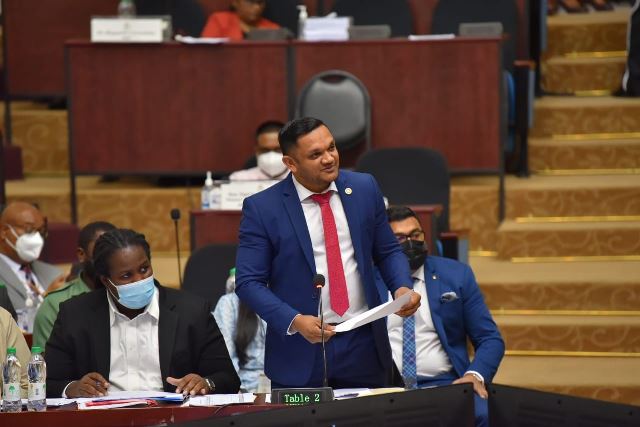 The committee approved the sums of $19,350,000 million to complete the facility. Six vehicles will be procured, including two Honda all-terrain vehicles (ATVs) and two Toyota four-door pickups.

Aranka is located in Region Seven (Cuyuni-Mazaruni) and is known to be an area of high concentration in mining activity.

The current implementation of the NFI is dedicated to field data collection in state forests by administrative regions – all except for Regions Four and Five where no state forests occur. In 2019, field work was completed for 48 clusters which represented approximately 507,099.00 hectares of state forest area in Region Ten.  In 2021, the GFC will begin by targeting clusters in Regions Ten, Two and Three; after which inventory teams will head to Regions Six and Nine.

“This programme commenced in 2018,” Minister Bharrat indicated during the estimate consideration. “It is estimated that this programme would cost $1.4 billion over a five-year period. However, we are proposing to complete this programme in 2022 at a total cost of $784 million, hence we are requesting the final $200 million to finish off the National Forest Inventory.”

Importantly too, the NFI is expected to provide the following key benefits at the national level: