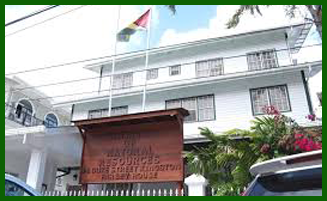 The ministry of Natural Resources was initially responsible for the coordination of activities among six (6) agencies which managed the natural resources and environmental portfolios of Guyana however, in late 2016 the environmental mandate was shifted from the Ministry of Natural Resources to the Ministry to the Presidency under the newly established Department of Environment. This meant that the ministry was now responsible for overseeing the coordination of activities among three (3) agencies; the Guyana Geology and Mines Commission (GGMC), Guyana Forestry Commission (GFC) and the Guyana Gold Board and will soon take on a fourth agency (the Petroleum Commission of Guyana-PCG) in preparation for Guyana’s emerging oil and gas sector.

To develop, implement and oversee policies for the responsible exploration, development and utilization of natural resources whilst ensuring the protection and conservation of the environment and advancement of the green economy.